Just wanted to share this one more “Strange Fact”. It is an another great example of Co-Incidence or something else…!!!???

On May Day 1776 Johann Adam Weishaupt founded the “Illuminati” an Enlightenment-Era Secret Society. For more information about it visit-
(http://en.m.wikipedia.org/wiki/Illuminati)

When this Illuminati’s Date of Foundation converted into Hijri Date, the result we get is 12th Rabi ul Awwal which is the Day of Birth of our Prophet Muhammad (pbuh).

I am sharing here again one more example of Strange Fact. Again the question here is whether this is just another example of Co-Incidence or something else!!!???

ONE-EYE:-
In Islam, ‘One-Eye’ symbol depicts nothing but ‘Anti-Christ’ (Dajjal). This ‘One-Eye’ symbol is also called ‘Eye of Providence’ or ‘All Seeing Eye’ and the most notable depiction of this ‘One-Eye’ appears on the reverse of the Great Seal of the United States, One-Dollar Bill. In other words more better known as one of the ‘Illuminati Symbol’.

ISLAND:-
Islam also clarifies very cleary that since the Lifetime of Prophet Muhammad (pbuh), the DAJJAL i.e the ANTI-CHRIST or FALSE-CHRIST has been hidden inside a MONASTERY on an unknown ISLAND. Also that the Anti-Christ has been tied to CHAINS and SHACKLES and on a specific day before ENDTIMES this SON OF IBLEES/DEVIL will be unleashed and he will try to establish its SATANIC SYSTEM based on FALSE-ISLAM all over the WORLD.

ONE-EYE & ISLAND:-
Surprisingly, this ‘ONE-EYE’ symbol has a great resemblance to the reverse image of the Most Haunted Island of the World or the Most Haunted Spot on the Earth, ‘ISLAND POVEGLIA’. Poveglia is a small island located between Venice and Lido in the Venetian Lagoon, Northern ITALY. A small canal divides the island into two parts. 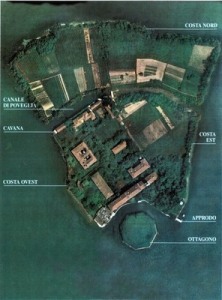 Watch the Video:-
A CONVERSATION WITH THE JINN-
http://m.youtube.com/watch?v=4dQOhQTaDjs#

“And war in a Country smaller than the End bone of the Spinal cord, the world will gather for its sake, as if it is the Richest Nation in the world for which the world has gathered to feast around. Its Leader will surrender the banner to the Leader of All Evil, which will come from the furthest Western Shores, then the beginning of the end as it wails to all the World to come to its aid. The Leader will regain his throne and Iraq will be destroyed in the confrontation at the end of time. The Leader of the Tiny Nation will fight the Army of the Mahdi, and the same Tiny Nation is again threatened with destruction because its Leader is the cause of its corruption….the Mahdi orders his execution and the small bone returns to the main body again”.
(Qalda bin Zayd bin Baraka’s Asma Masalik Li Ayyam Mahdi: Malik Li Kull id-Dunya Bi Amr Allah El-Malik). Check the Prophecy here-
(http://www.discoveringislam.org/end_time_wars.htm)

Scholars have described this country could be Israel, Kuwait etc. But I think this Prophecy describes the Vatican City. However Allaah knows the best. 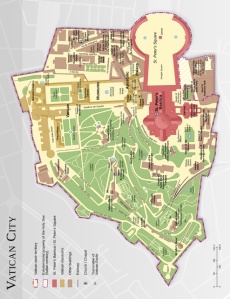 2) Described country is a small country, tiny nation etc. Israel is not really that small and tiny because there is a list of many more small tiny country or nations ahead. But surprisingly Vatican City is the one where this list ends since its smallest tiniest country in the World. Check the list here-(http://en.m.wikipedia.org/wiki/List_of_countries_and_dependencies_by_area)

3) Whole world will gather for the described country’s sake as if it is the richest one. Just imagine a War in the Vatican City and how the World wilk react at this??? You surely will get this point just through imagining the scene in your minds.

5) Described country’s corruption is all due to its Leader. Corruption in the Vatican City also symbolically all Christian Churches in the World have been corrupted due to its Leaders i.e all Popes who are actually under the control of Anti Christ and also involved in hardcore Satanic Rituals.

After my recent research blog about Comet Halley as a sign of endtimes, now sharing with u all an another research blog about Comet Hale-Bopp which is also a sign of endtimes but this sign is one among those signs which will appear before the appearance of IMAM MAHDI. You all will be surprise how our beloved Prophet Muhammad (pbuh) had prophecised and informed his Ummah about one such Grand Sign of EndTimes Event in the Sky. But at the same time i do wonder how this Hadees/Prophecy has been left aside or ignored without deep research about it till today?

Before moving further u should remember that while understanding the Signs or Codes in the Quran or Hadees the words used in the arabic should not always be taken literal sometimes symbolical point of view need to be consider too.
……………………………..

Abi Ja’far said: “If the Abbas reaches Khorasan, “Qarn Zu-Shifa” rises in the East. The first time it appeared was at the perishing of the people of Prophet Nooh when Allah drowned them. And it rose at the time of Prophet Ibrahim, when they cast him into fire, and when Allah caused Firaun (time of Moosa) and those with him to perish, and when Prophet Yahya son of Zakariah was killed. If you see this, seek refuge in Allah against the evilness of Fitan (strifes and tribulations). It will rise after the eclipse of the sun and the moon. Then, soon the Abqa (a man seeking to rule) in Egypt will appear.”
(Nuaim bin Hammad’s book Kitab Al-Fitan, Al-Muttaqi al-Hindi’s book Al-Burhan fi `Alamat al-Mahdi Akhir az-Zaman, p. 32)
…………………………….

Now when the arabic word ‘QARN’ is literally translated into English we get the word ‘HORN’ but this very word also has another meaning which is ‘ALARM-SOUND’ in English. Now try to guess another word for ‘Alarm-Sound’… Yes its the word ‘BOP’ as in blowing the sound ‘Beep Beep Bop’. Or you can go reverse way and check the meaning of the word ‘BOP’ in an English dictionary. So the arabic word QARN symbolises the english word BOPP in this context.

When the arabic word ‘SHIFA’ is literally translated into English we get the word ‘HALE’. Yes both these words SHIFA and HALE means cure, remedy, state of well-being, free from illness.

‘Qarn zu Shifa will rise after the eclipse of sun and moon.

Researchers say its last Perihelion Date of Apparition was 1 April 1997. And before this Sun had eclipsed on 9th March 1997 and Moon had eclipsed on 24th March 1997. In fact on March 9th 1997 that solar eclipse in China, Mongolia and eastern Siberia allowed observers there to see the comet in the daytime.
……………………………..

Then soon ‘Abqa’ will appear in Egypt.

I am not quiet sure about this but this Abqa which means a ‘man seeking to rule’ may be Ayman Al-Zawahiri, an Egyptian doctor and leader of Egyptian Islamic Jihad. But, however Allah knows the best. The Luxor massacre of 17th November 1997 possibly suggest this fact. Also, the 1995 attack on the Egyptian Embassy in Pakistan, was the Egyptian Islamic Jihad’s first success under Ayman Al- Zawahiri’s leadership.
……………………………..

Ibn Mas’ud said: “There will be a sign in Safar and the star with a tail will begin.” (Nuaim bin Hammad’s book Kitab Al-Fitan)

A sign in the month of Safar as a Star with a tail will begin.

قال الوليد وقال كعب
هو نجم يطلع من المشرق ويضيء لأهل الأرض كإضاءة القمر ليلة البدر
Ka’b said: “It is a star that rises from the East and illuminates for the people of the Earth like the illumination of a moon in a full-moon night.” (Nuaim bin Hammad’s book Kitab Al-Fitan)

Comet Hale-Bopp was illuminated indeed for the people of the Earth since it was the most widely observed comet of the 20th century and one of the brightest seen for many decades and was visible to the naked eye for a record 18 months. Hale–Bopp became visible to the naked eye in May 1996. And till in January 1997 it was already bright enough to be seen by anyone who looked for it, even from large cities with light-polluted skies. And the last naked-eye observations were reported in December 1997, which meant that the comet had remained visible without aid for 569 days, or about 18 and a half months.
……………………………..

These pophecy about ‘Khankan’ and ‘Zawahir’ during the apparition of Comet Hale-Bopp need to be analyse by some Experts in Islam.
…………………………….

For more information about the Comet Hale-Bopp visit-
http://en.m.wikipedia.org/wiki/Comet_Hale%E2%80%93Bopp

Halley’s Comet next apparition will be on 12th Rabi ul Awwal. Yes,on Prophet Muhammad’s (pbuh) Day of Birth, and also its the 19th apparition.

The apparition of Halley’s Comet during the lifetime of our
Prophet Muhammad (pbuh) particularly on the Hijri date 11/12th Rabi ul Awwal can really be Coincidence??????

The next apparition of Halley’s Comet will be on 28th July 2061 CE,which also falls on 11/12th Rabi ul Awwal when converted into Hijri Calendar.

The upcoming next apparition of Halley’s Comet particularly again on the same Hijri date 11/12 Rabi ul Awwal can really be Coincidence again too?????

Most importantly this upcoming next apparition will be the exact 19th apparition. HOW??? Prophet Muhammad (pbuh) has once said that his demise will be the first Sign of Hour. So, the apparition of Halley’s Comet during his manifest lifetime cannot be counted as the Sign of Hour. After our Prophet left his Ummah advising us to observe the Signs of Hour in his absence and save ourselves from confusion and misguidance, if we count all apparitions this next one will be the 19th one. Verily, Islam testifies the significance of no.19, similarly in Al Qur’an too.

More importantly the Halley’s Comet’s apparition on day ‘FRIDAY’ was only before the birth of Prophet Muhammad (pbuh), and ever since that apparition never ever its Perihelion Dates of Apparition coincided Friday.

Can this upcoming next apparition of 28th July 2061
which falls on 11/12th Rabi ul Awwal,
which is the Day of Birth of our Prophet,
which is also a 19th apparition
be all Coincidences too?????????

No, there is no such thing as Coincidence, every event on the Earth and in the Sky is Predestined by Allaah (swt).

Check and cross-check this Analysis-

Let us have a look at the Perihelion Dates of Apparitions of Halley’s Comet.(Note-Date Convertors may show 1 day error into Hijri conversions)